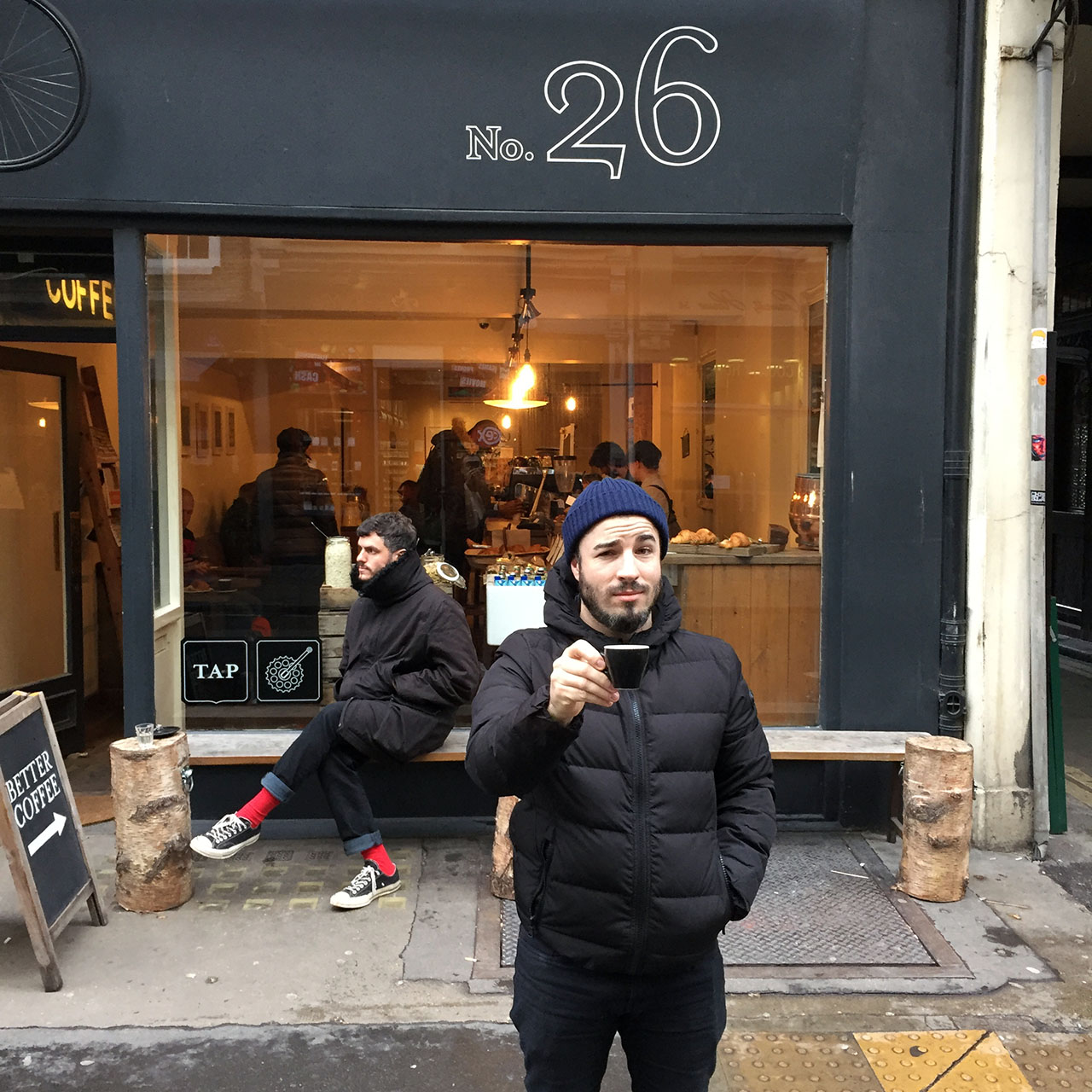 – Can you please introduce yourself in a few words.
I am Rob Dunne. Another Irish person lost in London, purely trying to take a little piece of land back after the British hung out in Ireland for so long, I think it’s only fitting.
I make coffee but I think tea, while always aware I work in hospitality and nothing else.

I approach everything with the same goal, always do what you are doing to your best ability, from sweeping the floor to making a coffee, to serving a guest. Design and function are absolutely important. I will tell you, you are not the most important person inside your business, your audience is, so play to them.

I personally don’t know what role I play in coffee, I purely do as I wish to, when and where and because I enjoy doing it. I need no title or box to be understood.

– What’s your story in the coffee industry?
Well so far, I transferred into the world of coffee in 2009 after a background in printing and graphic design, studying tea and four years of working as a Short Order Chef. With three months practical experience as a Barista, I entered, and placed fourth in the Irish IBC. Following this, I took a position as Head of Training for Matthew Algie, which brought me to London in 2010.
Through a mutual appreciation for pioneers of fine tea in London, through Postcard Teas, I encountered Victor Frankowski and we joined up to operate the Climpson and Sons cart on Broadway market for the next year. Shortly after this I joined Vic at Tapped and Packed where Vic had set up London’s newest addition to the specialty coffee scene.

By 2011 ending we conceived plans to open our own café. Protein by DunneFrankowski would serve as a conduit for expressing a unique perspective on coffee culture, while providing a platform for creative projects, including but not limited to hospitality in a broader sense.

This unusual and new concept of a Creative Coffee Consultancy leads to an array of not so regular happens.
– Hosted the 2012 London heats of the UKBC, including creating an informal guest journey through café culture.
– Judged UKBC 2012, 2013 and 2014
– Coached the 2012 and 2013 Spanish Barista Champion, Jordi Mestre
– Consulted on design and concept for cafes both in Europe and Asia
– Opened their second venture, Sharps Coffee Bar in Fitzrovia.
– Conceived and executed the inaugural Coffee Masters in conjunction with Allegra Events

I now reside at Old Spike Roastery, which at this point has just celebrated its first year of operations.

– When did Old Spike Roastery open and what is the story behind?
Old Spike opened in the end of February 2015. What makes it a little different from your regular coffee shop is that we are a social enterprise, setup exclusively to help local homeless people in our community. Our mission is to provide expert training, housing and a job that will act as a catalyst toward long term employment. Old Spike was founded by Cemel Ezel, the social enterprise side and Richard Robinson, who was the reason the business took a coffee direction. I was lucky enough to have been approached and invited in as a partner due to previously knowing Richard from Protein.

– What’s your specialty and what makes you different?
I seriously do not know. I like to think I make things look better, I’m a knoller, a polisher and presenter. I consider concept, style and presentation. I do and I make. I would say DunneFrankowski’s Tumblr account Look-See-Listen-Drink-Eat , A Visual Side of Cafe Culture present’s this idea visually. Clearly I am perceived a barista although I only do freelance and event work these days and lately I brown coffee beans but refuse to call myself a Roaster purely as I have fallen into the role. But then again isn’t that how the coffee industry unfolds over a baristas working career, you make of it what you want it to be.

– What was your first coffee experience?
Genuinely I cannot even recall, I am sure it was some standard black coloured liquid in Ireland at some point in my teens and I maybe made a secondary attempt to comprehend it in my early to mid twenties. I did not drink coffee ever as I found it repulsive. The first time I considered coffee to have any interest as I personally dedicated my time to tea, was on meeting Stephen Morrissey in 2008 at a Caffe Culture Event in London. Four months later I decided coffee was worth taking a look into. So its Stephens fault.

– What was your best coffee experience?
I really hate the idea of having expectations. So I try my best to lower them for everyone and myself, I am happier when I don’t hype what is expected of someone or someplace. But I cannot recall the best, I register ‘Good’ and maybe I’ve yet to register the best as I’m not expecting it, maybe I’ve had it and let it pass. I would say though, the best espresso I did register, was roasted by Sang Ho Park for the Legend that is Mr John Gordon. It was a single allotted, single varietal Ethiopian for his 2014 UKBC. I was lucky to obtain a kilo of it also to pull at Sharps Coffee Bar.

– Do you prepare coffee at home ? If yes, what method do you use?

Not often, as I was never a coffee drinker as such, I do not wake by drinking coffee, I happily see myself tasting coffee instead. But when I do, it is an Aeropress. I am also prone to using a cupping method and filtering via the portafilter handle and basket while working at events or bars which do not have filter options.

– How do you like your coffee? Black, sugar and milk, iced, vietnamese style,…?
BLACK, in all sizes and shapes, just don’t give me a paper cup.

– How would you qualify yourself as coffee drinker (occasional, heavy, addict…)?
HaHa, a non drinker, I taste as we all do daily but I only choose to drink it, if I feel intrigued by the coffee. I don’t need caffeine to motivate me.

– Have you always been into the coffee industry? If not, what was your previous job?
I think I answered that previous. Answer being no, I studied Tea for two year with the intentions of opening an asian tea house in Dublin in 2007. I managed cafes but more 65-100 seaters with a food focussed offering. I acted as a short order chef making cafe food again for lager Cafe businesses. I literally have only fallen into COFFEE as I do love its cultural surroundings and social leveling ability.

– Do you have another passion or a hobby besides coffee?
Design, Photography, Bikes, Food, Cocktails, I think my hobbies interlock with my work and I’d never wish to separate my passions from work and vice versa as I would be miserable otherwise. I like to be aimless with no expectations in new cities, if you call that a hobby. Oh and recently on a trip to Rome, I took up Lizard Hunting.

– What other place would you recommend, anywhere in the world (coffee or not)?
Just go to Rome and go for a walk, drink the coffee, respect the culture, eat, drink and be happy.

– What is/are your favorite website(s) to get information about coffee?
I guess if I was wishing to learn, It has to now be Matt Perger’s posts on Barista Hustle. Sprudge for fun and purely to see who and whats opening internationally. Designspiration and NotCot for random inspirations. Chefstep for technics and I am always in contact with the bar industry as I obtain more from alcohol professions with regards to flavour, recipe and balance.

– What would you say to people who don’t know much about coffee?
Simply experience it. You will not read about its taste and flavours on a computer. If you have a question, try answering it yourself before expecting answers to be given to you. Be open to all of it and stop being narrow before you even begin the journey, as you clearly do not know at this point, hence it’s the beginning. Firstly learn what taste, aroma and flavour are, then know what you like and do not like. What you do not like should be more important to understand for self development than the ever easy « I Like ».